The music is based on a special sound generator, which I – building upon years of preliminary work – developed in Winter 2010/11. This generator creates multidimensional, holistic wave forms that can be heard on just as many loudspeakers. (Several such generators are combined into a type of organ). The inner core of such a generator is a multidimensional 'phasor,' a rotation matrix derived from the innumerably different variants of a magic square of the magnitude 10*10.

The characteristic style of the music is calm, meditative, space-filling, but not loud. However, 10 or more independent, robust loudspeakers per room are needed.
4 to 5 variations which are very different in character respectively form a closed cycle lasting 1 to 2 weeks, uninterrupted, without repetition.

Threnody (elegy) – The title is a reference to an archaic form. (It has nothing to do with 'lamenting,' 'moaning' or 'bickering'). It wants nothing, it is not directed at anyone, and for this very reason applies to everyone.

Magic Square and Rotation Matrix
I may assume that everyone knows what a 'magic square' is. The numbers from 1 to n² are arranged in a square n*n so that the sums of all columns are equal, as are the sums of the diagonals. I found out the laws of formation of such number arrangements by myself at some point. (Today they are found on numerous Internet sites; such a thing did not exist back then, and the old books frequently contained finagled solutions – particularly for the higher squares as of 6*6).
Naturally, the magic squares, as the term already indicates, were attributed to have magic characteristics; they served for incantations and as amulets, or simply for solving puzzles. What fascinated me right from the beginning, however, is a slight similarity of the magic square with the characteristics of a rotation matrix, so that one would almost like to speculate that a magic square is a degenerated, mystified form of a rotation matrix, as it could have been known by older cultures.
In a rotation matrix of arbitrary order, the sum of the squares of all row elements and all column elements must, among other things, be equal to 1. Beyond that, the vector product of each row with each other row, as well as each column with each other column, must be 0.

Multidimensional Phasors
I had not dealt with them for a considerable time. In Winter 2010/11 I had to interrupt my musical work because negotiations on a performance had protracted. I utilized the time to devote myself to this topic once again and came to startling results. By means of orthonormalizing, a magic square is easily rearranged in a corresponding rotation matrix. That is then an operator with which one can rotate a vector or a body (a group of vectors), a 'phasor'. If one divides such a rotation into many small steps (a root of the matrix which one can find through its Eigensystem), then one can follow the movement of each point as a multidimensional spatial path or wave form.
In a trivial case of 2 dimensions, that is always a circular motion around the center.
With 3 dimensions, there are likewise circles around a rotational axis lying somewhere in the space.
As of 4 dimensions, there are more or less complicated wave forms in the space. If one rotates a unit vector in this way, then it describes a path on the 'surface' (a warped subspace) of a hypersphere whose distance from the center is always equal to 1.

Here are a few graphical examples of the projection of such paths onto two dimensions respectively: 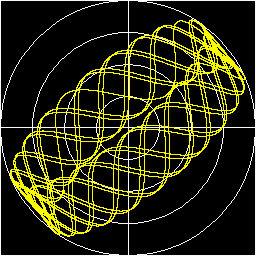 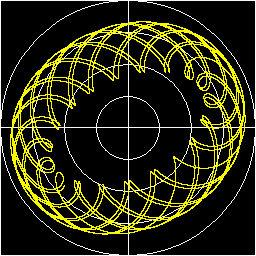 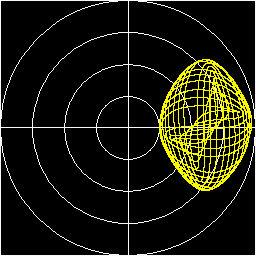 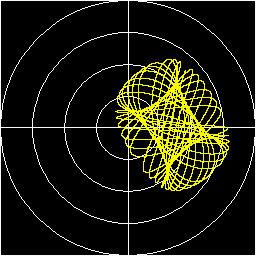 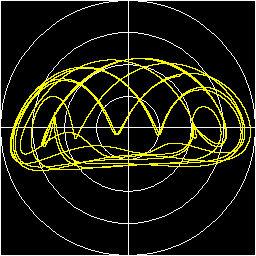 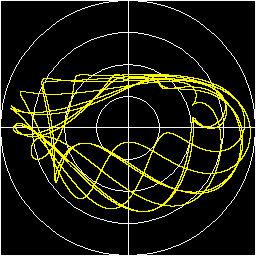 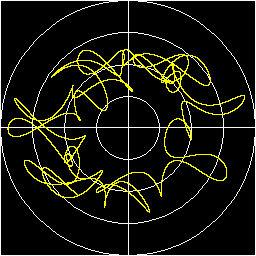 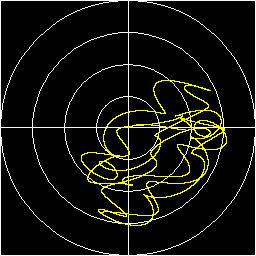 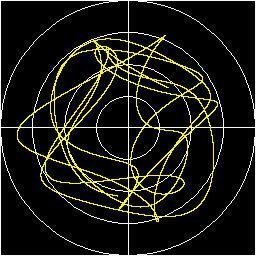 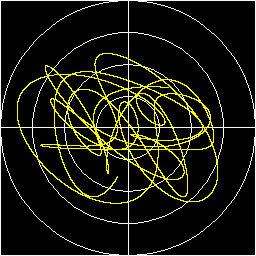 If the rotation is fast enough, then the movement projected onto one dimension is emitted and heard over a loudspeaker as a sound wave – respectively, over as many loudspeakers as the movement has dimensions.
This shows that each time there are only a few sinusoidal tones, which form bizarre mixes with different presence in the various dimensions. Strictly speaking, they are always n/2 partial tones, resp., (n-1)/2 in the odd matrices.

The Generator
At first glance, it appears absurd to make such a computational effort for a handful of sinusoidal tones. Even so, one requires x-million per second, at times even complex arithmetic operations for it.
The actually fascinating thing about it, however, is the chords that emerge thereby. No mannered tone system, as always, is prescribed; the tones do not acquiesce in a known arrangement. One can nonetheless understand them, can comprehend their peculiar stringency.
The construction of such a generator is as described above: A rotation matrix is derived from the pattern of a magic square. A multidimensional phasor, which is solely responsible for the constant development of the wave forms. Besides the base form of a magic square, there are, however, still variants of number arrangements that likewise conform to the conditions of a magic square. A closed group of them can be summarized by n! (factorial) There are 24 at 4 dimensions, 120 at 5, approx. 3.5 million at 10 dimensions. These variants are ascertainable through systematic permutation and are thus available for the generator. Each variant stands for an independent, holistic, multidimensional wave motion; forms a specific chord.

The Organ
I have assembled a type of organ out of more such generators, which have already separately produced a sound perceivable as a chord. By all means, based on the construction of an ordinary organ. A generator is more responsible for the continuous sound – one for the striking, one for the cessation, for vibrato or modulation. They can be equally modulated, or merely from the same root, or also in different dimensions. In any case, there are multidimensional modulations and automodulations. The possibility also exists to intervene in the core of a matrix itself (Eigensystem), to change or modulate these.

The Elegy
I spent many weeks getting to know the character of the different variants in different dimensions - the more simple ones up to 18 dimensions; beyond that, several samples up to a magnitude of 100 dimensions and above. Much of it sounds familiar, some, on the contrary, like 'music from another star'. Generators with 5 and 10 dimensions are especially outstanding. Their chord sequences sound very familiar, reminiscent of Bach, sometimes also of Schubert or Satie – if one dedicates oneself to the sound. And this, although – as already mentioned in the introduction – no tonal system is being operated and that micro-intervals and unorthodox tone combinations can be discerned if it is listened to analytically.
'In tune' - I cannot think of a better word for this. This totally has the effect on me as if the old masters had known these tone sequences, had heard them internally, and had expressed them with their means, like I also recognize them and can retrieve them with my means.
Thus, I concentrate on the matrix 10*10.
But how does one handle such a material?
After several virtuous attempts, it was clear to me that these sounds have to take their own course. A plethora of additional data, which can be put to use for the composition of the temporal progression, lies concealed in the matrix. In the end, I came to a slow, calm development of chord sequences through a continual permutation of only two rows and two columns each in the underlying magic square. And the magnitude also resulted thereby: A complete cycle, without repetition, lasts in this way 100 to 200 days! – an 'abbreviated version,' a smaller, closed cycle, 1 to 2 weeks.
Of course, such a large form can neither be dramatic nor epic –

an 'elegy' at best, without a special occasion. The calm, steady, almost conciliatory characteristic style of the chord sequences also does its part to add to the whole.

Setup
At present, I have finished two variants of it from the data material. (Audible samples of it can be presented at any time). One of them consists of the aforementioned calm chord sequences, the other of irregular cessations with the character of sound bowls. (Here, once again, no two sounds that are alike). A third and fourth variant are in the works. Until the autumn of 2012, four to five variations that are very different in character could be finished: a large, accessible sound installation for several divided rooms, continuing over a period of one to two weeks.